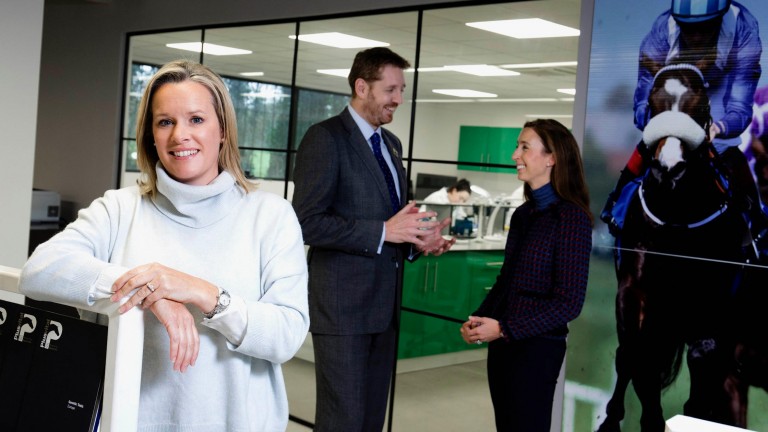 Ten Years On From The Discovery Of The Speed Gene

Incredulity To Acceptance: Ten Years On From The Discovery Of The Speed Gene

This article, entitled Incredulity To Acceptance: Ten Years On From The Discovery Of The Speed Gene, was originally published in The Racing Post on 16th July 2019.[vc_single_image image=”11164″ img_size=”full” alignment=”center”]Genetic research is nowadays part and parcel of popular culture, what with ancestry tracing kits being exchanged as gifts between friends, foundling children finding relatives through DNA testing on family reunion programmes and news of cold-case crimes being solved thanks to the latest scientific breakthroughs.

But ten years ago, when Professor Emmeline Hill and her team at University College Dublin discovered the ‘Speed Gene’ in thoroughbreds that identifies their optimum racing distance, the subject was still shrouded in mystery.

So much so, that when Hill went public with her findings in 2010 and launched a commercial test to determine which copies of the Speed Gene a horse had inherited – either C:C (those suited to sprint exercise), C:T (a blend of sprint and stamina) or T:T (stamina) – there was as much incredulity, even suspicion, from industry participants as there was enthusiasm for a potentially game-changing development.

“Someone said to me recently the Speed Gene Test was before its time,” reflects Hill, “because ten years ago people didn’t understand genetics; it wasn’t widely talked about as it is now, with DNA samples used in criminal cases and people tracing their ancestry. Back then it was a whole new world and the research wasn’t widely understood. Some thought it had more value than it did, and would be a silver bullet, while others thought it had no value at all.

“Where we struggled, and still do, is with acceptance. There was immediate concern about the potential to change the value proposition of an individual at the sales – people were concerned that if it was known they were testing and bringing horses to the sales, people would ask why. We were very aware of that and this is why we don’t reveal the identities of our clients.”

Common Misconceptions Of The Speed Gene

Hill and her team do not carry out genetic tests at the sales, and she says there are no plans to do so in future.

“There was also a misconception in the early days that T:T meant ‘slow’, which is absolutely not the case and we have never said that,” she continues. “The Speed Gene Test is based on a single gene that is a highly accurately predictor of racing distance, but you can have a C:C sprint type that is an elite performer and a C:C sprint type that is not, and equally for C:T and T:T. It’s a quantitative, not qualitative, measure.”

Hill had the valuable endorsement of Jim Bolger – her co-founder in Equinome, which marketed the Speed Gene Test until the company was purchased by Plusvital in 2015 – when she launched a decade ago and despite doing so in the middle of a recession and meeting with far from universal approval, the enterprise took off.

“In the first couple of years we grew quite rapidly, so much so that we were able to expand, bring in new staff and reinvest income from the original Speed Gene Test into research and developing new tests,” she says. “That was the focus in the first couple of years – getting a solid client base, and now we serve some of the major owner and breeder operations globally along with leading trainers in Ireland, Britain and Australia.”[vc_single_image image=”11165″ img_size=”full” alignment=”center”]The C:C, C:T and T:T designations are now common currency in the breeding industry, although what version of the Speed Gene horses possess, or even whether they have been tested, rarely becomes public knowledge – with some exceptions. For example, connections of Galileo Gold famously announced that he was a C:C to justify their decision to not send him to the Derby, while Bearstone Stud proudly boasts in its marketing that its two stallions Fountain Of Youth and Washington DC are C:C.

“One of the difficulties we have is that we can’t reveal who our clients are,” acknowledges Hill. “We never have. It’s an obstacle to our marketing as we’d love to be able to say ‘so and so is doing it’ but it was very important to establish trust within the industry to ensure the longevity of what we’re doing.”

A valuable by-product of the extensive genetic data collected by Hill and her team – always through authorised blood samples, never hair – and the resultant research findings is the light it shines on wider industry issues. Most pertinent, when it comes to the Speed Gene, is the evidence it provides for the alarming decline in stamina breeding in Europe.

“We’ve tracked the distribution of the speed gene over time, since I first started collecting samples for my research project five or ten years before the discovery of the speed gene,” says Hill. “Over 15 years we’ve seen a halving of T:T horses in the thoroughbred population in Britain and Ireland and a 70 per cent increase in C:C horses. In Australia, only seven per cent of thoroughbreds are T:Ts, so that could be only a matter of years away here if the trends continue.”

We all know the paradox whereby speedily bred horses are deemed to be the most commercial at auction, despite many of the most prestigious races being held over longer distances. But Hill’s research has exposed an even more striking contradiction; one that also serves to undermine another complaint about the speed gene test when it was first launched – that it told you only what could be gleaned from a glance at the horse’s pedigree.[vc_single_image image=”11166″ img_size=”full” alignment=”center”]“We’ve found that more than 50 per cent of C:C horses are not tried at the shorter distance as three-year-olds, which shows that owners and trainers still want long distance horses on the track even though breeders are producing short distance horses for the sale ring,” says Hill. “Put simply, a majority of C:Cs at that age are racing over longer distances that they’re not suited to. Breeders don’t see that owners and trainers do in fact want C:Ts and T:Ts.

“It’s incumbent on the industry to provide incentives to support stamina races. I know the BHA and TBA have worked on that but I wonder if it’s going to be enough. People follow the money, so there needs to be a lot more value placed on production of stayers.

“The trouble from a genetics point of view is a narrowing of the gene pool, and diversity is key to the survival of any population. That is of concern to me and we’ve been sharing our findings with the racing and breeding bodies in Britain and Ireland. We have a massive database that can be utilised for the benefit of the industry – it’s a unique resource, no one else has anything like it worldwide. We’re not here to disrupt the industry.”

No Substitute For Horsemanship

Best known for the Speed Gene, Plusvital has added a number of other genetic tests for racehorses to its offering, including those that can project height, preference for turf or dirt and, most recently launched to the market, the likelihood of making it to the racecourse. There is also the Elite Performance Test, which identifies individuals with the highest genetic potential for reaching the top on the track and at stud.

It is important to bear in mind, though, that Hill is not claiming the products to be a magical elixir for breeding top-class runners.

“Genetics is part of the puzzle that should be used to complement all the other information about the horse, and the environment plays probably an even greater role than genetics,” she says. “If you look at heritability, which is the genetic contribution to the variance in performance, it’s nowhere near the whole; it’s maybe 30 to 40 per cent. Genetics will never be the silver bullet people think that it might be, but nor is it fool’s gold.”

Explaining more about the Elite Performance Test, she adds: “We take samples from those horses who are Group winners or have ratings above a certain threshold, and those who are not, or are rated lower, and build DNA profiles for the two diverse sets of horses. We then use highly sophisticated algorithms, based on machine learning, to pick out the genetic markers that are separating out the two groups and then give each of them weightings.”

But, she reiterates, the tests will “never displace the role of the horseman, the nurturing environment and management that horses are given”.

Another important distinction to be made with genetic testing is that it is predictive, not diagnostic; and again, Hill expresses her frustration that public opinion on the matter is often polarised between those who think it is of no use and those who believe it to be a foolproof method of breeding superstars.

“The tests will never be diagnostic,” she says. “But we are able to identify genetic markers that allow us to make a prediction of higher or lower risk for development of certain traits, and eventually this technology will be applied to heritable diseases. The concept of predicting risk is not novel; at the sales, vets will provide an assessment of whether a horse will have a racecourse start based on observations on x-rays or radiographs.

Wider acceptance of genetic testing has also been inhibited by industry bodies being actively resistant towards it. In 2017, the International Thoroughbred Breeders Federation agreed to adopt a policy that included statements that it ‘[saw] no value at present in the widespread usage of performance test genomics’ and that ‘tests have significant potential to adversely affect the existing pattern of racing and the practices and valuation system of the breeding industry’.

The ITBF policy does, however, go on to state – while holding its nose, one feels – that ‘some individuals may wish to continue to use this test and they are of course free to do so’.

In the face of such conservatism, which appears to close the door on a field of science that could one day help breeders weed out heritable diseases, Hill is remarkably sanguine.

“There’s a fear or lack of understanding within the industry preventing people from using the technology more,” she says. “But I think we’re getting there. Data is the future in any industry, and this genetic data cannot be denied. It will be a more integral part of thoroughbred racing and breeding in the future; how, I’m not exactly sure. That’ll be up for the industry to decide.”

Genetic testing and the public attitude towards it have evolved significantly in the decade since Hill identified the Speed Gene. It’s hard to think that in another ten years it won’t be even more ingrained in the culture of breeding; never a replacement for the art of horsemanship, but an essential tool that aids our understanding of producing and preparing thoroughbred athletes.